is classified by anthropologists as an archaic magico-religious phenomenon in which the shaman is the great master of ecstasy. Shamanism itself, was defined by the late Mircea Eliade as a technique of ecstasy.

may exhibit a particular magical specialty (such as control over fire, wind or magical flight). When a specialization is present the most common is as a healer. The distinguishing characteristic of shamanism is its focus on an ecstatic trance state in which the soul of the shaman is believed to leave the body and ascend to the sky (heavens) or descend into the earth (underworld). The shaman makes use of spirit helpers, with whom he or she communicates, all the while retaining control over his or her own consciousness. (Examples of possession occur, but are the exception, rather than the rule.) It is also important to note that while most shamans in traditional societies are men, either women or men may and have become shamans. 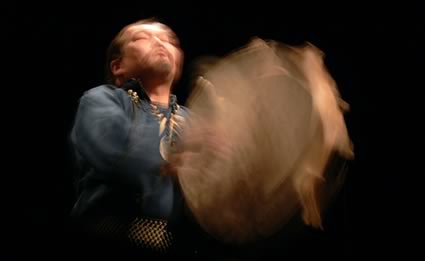 There are a number

of relatively common practices and experiences in traditional shamanism which are being investigated by modern researchers. While the older traditional practices are ignored by some researchers, others have begun to explore these older techniques. The emergence of the new field of the 'anthropology of consciousness' and the establishment of Transpersonal Psychology as a "Fourth Force" in psychology have opened up the investigation of research into the nature and history of consciousness in ways not previously possible. Outside of academic circles a growing number of people have begun to make serious inquiries into ancient shamanic techniques for entering into altered states of consciousness.

developed techniques for lucid dreaming and what is today called the out-of the-body experience (oobe). These methods for exploring the inner landscape are being investigated by a wide range of people. Some are academics, some come from traditional societies and others are modern practitioners of non-traditional shamanism or neo-shamanism.

Along with these techniques,

the NDE or near-death-experience have played a significant role in shamanic practice and initiation for millenia. There is extensive document- ation of this in ethnographic studies of traditional shamanism. With this renewed interest in these older traditions these shamanic methods of working with dreams and being conscious and awake while dreaming are receiving increased attention. (Additional information about the out-of-body experience may be found in Jouni Smed's faq alt.out-of-body FAQ.)

to consciously move beyond the physical body is the particular specialty of the traditional shaman. These journeys of Soul may take the shaman into the nether realms, higher levels of existence or to parallel physical worlds or other regions of this world. Shamanic Flight, is in most instances, an experience not of an inner imaginary landscape, but is reported to be the shamans flight beyond the limitations of the physical body.

As noted in this article,

the Call to shamanize is often directly related to a near death experience by the prospective shaman. Among the traditional examples are being struck by lightening, a fall from a height, a serious life-threatening illness or lucid dream experiences in which the candidate dies or has some organs consumed and replaced and is thus reborn. Survival of these initial inner and outer brushes with death provides the shaman with personal experiences which strengthen his or her ability to work effectively with others. Having experienced something, a shaman is more likely to understand what must be done to correct a condition or situation. 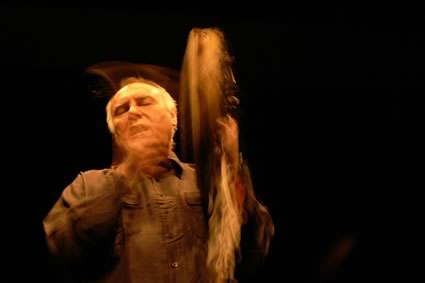 While shamanism may be readily identified among many hunding and gathering peoples and in some traditional herding societies, identifying specific groups of individuals who might be called shamans is a difficult task in more stratified agricultural and manufacturing based societies. A society may be said to be Post- Shamanic when there are the presence of shamanic motifs in its traditional folklore or spiritual practices indicate a clear pattern of traditions of ascent into the heavens, descent into the netherworlds, movement between this world and a parallel Otherworld, are present in its history. Such a society or tradition may have become very specialized and recombined aspects of mysticism, prophecy and shamanism into more specialized or more 'fully developed' practices and may have assigned those to highly specialized functionaries. When such practices and functionaries are present or have teplaced the traditional shamans found in historical or traditional shamanism the use of Post-shamanic is appropriate.

a society may be said to be Post-Shamanic when at least 6 of the following 8 conditions have been met:

motifs are found among many Indo-Eruopean, Asian, African and some native peoples of North America. The use of Post-Shamanic as a term makes examination of these parallel traditons and possible survivals of earlier shamanic traditions easier.

What is the origin of the word 'shaman'?

Shaman comes from the language of the Tungus of North-Central Asia. It came into use in English via Russian.

What are the usual roles of a shaman?

In contemporary, historical or traditional shamanic practice the shaman may at times fill the role of priest, magician, metaphysician or healer. Personal experience is the prime determinant of the status of a shaman. Knowledge of other realms of being and consciousness and the cosmology of those regions is the basis of the shamanic perspective and power. With this knowledge, the shaman is able to serve as a bridge between the mundane and the higher and lower states. The shaman lives at the edge of reality as most people would recognize it and most commonly at the edge of society itself. Few indeed have the stamina to adventure into these realms and endure the outer hardships and personal crises that have been reported by or observed of many shamans.

What is a Shaman?

Webster defines "Shaman" as simply a religious man. The word Shaman comes from eastern Siberia (the Tungus Tribe) an area where shamanism was the most prominent and where its origins may be found. Translated, shaman means "to heat up; to burn; to work with heat and fire." The essential characteristics of Shamans are mastery of energy and fire as a medium of transformation.

Tribal peoples believed that the Shaman was a healer and keeper of tribal history (handed down through the oral tradition) and a "Walker Between Winds." The latter term refers to the Shaman's ability to send his spirit to walk with the ancestors between the winds. To walk between the winds one has to look around the edge of reality to the paths between space. There is where the spirits of the ancestors walk the trails of time.

Amari Magdalena, Founder of the Institute for Shamanic Synthesis lived in New Mexico between 1990 and 1993. During her stay she had the privilege of working with a Toltec Nagual, don Miguel Angel Ruiz; Elena Avila a Mestizo Curandera; and Garthenia E'star a Celtic/Cherokee Shaman.

But this is not an exclusive practice nor is it limited to religious persons. Shamanism can be practiced in your everyday life to enhance the Earth Dance that each of us is here to perform.. Shamanic practice builds a bridge between your inner and outer worlds. There are many books and bodies of thought presented on Shamanism today. Two distinct paths seem to emerge from these offerings: The Path of the Heart with an emphasis on individuated healing, integration and empowerment leading to service; and, the practice of Sorcery focused on acquiring powers over others.

The Institute of Shamanic Synthesis subscribes solely to The Path of the Heart. Instructors and students, beyond the beginning class, take and oath of intention to state their plans to use the tools of Shamanism for the greatest common good.

..performance is special: normal rational processes would interfere with it. The language of subjectivity used by musicians protects against such interference. But it can also be read as making explicit the parallel between improvised performance and certain types of religious experience. By Tim Hodgkinson
Read article: Improvised Music and Siberian Shamanism